Challenge: Microsoft Dynamics AX 2012 out-of-the-box enables mixed mode manufacturing including discrete, process, project and Lean approaches. In the previous part we established an end-to-end functional flow for Make to Order Lean Manufacturing scenario, this gives us a great context. Now the goal is to explore how we can make use of IoT device to implement a broader Lean IoT Demo scenario using the concept of "Intelligent" location.

<![endif]>
Having this scenario to implement we have to decide what hardware to use and how to use it. Obviously in order to implement "Intelligent" location which scans itself we'll need some sensors. In addition to this in order to support this scenario we need to decide what backend will be used and how, and how to write appropriate business logic for it. Finally we should not forget to think about how device will communicate with the backend, how device will be powered and how to observe the results of the scenario. This is exactly what we'll do below …
Let's start with the device itself
Section: Device
There may be multiple options of devices to be used. For example, Raspberry Pi 2 or Arduino. I chose Raspberry Pi 2 for this scenario. The Raspberry Pi is a tiny and affordable computer that you can use to learn programming through fun or any practical projects. Microsoft Windows Dev Center provides a tremendous amount of resources to get you started with building your own IoT scenarios. Here is a great place to start: https://dev.windows.com/en-us/iot
When looking at Raspberry Pi 2 device we'll see that it has got SD card (1) (where Windows 10 IoT Core OS will be loaded to), Ethernet port (2) for communication, HDMI port (3) for connecting to a display,  power (4) and multiple USB ports( for example, if you want to connect an external USB keyboard, etc.)
Raspberry Pi 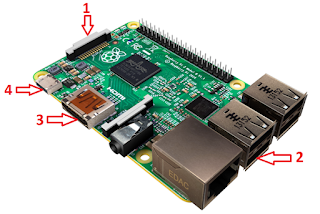 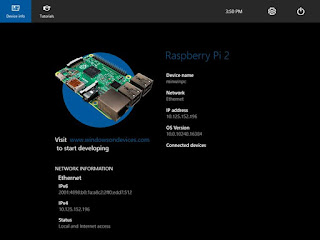 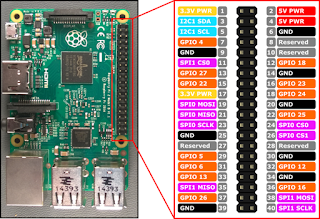 Now we are at the point when we know enough about the device and can put something tangible together. Let's explore what sensors may help us to implement the scenario
Section: Sensors
This is how my setup for Lean IoT Demo scenario looks like
Setup 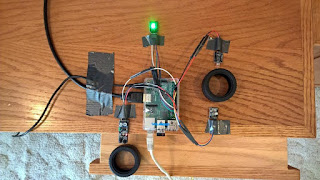 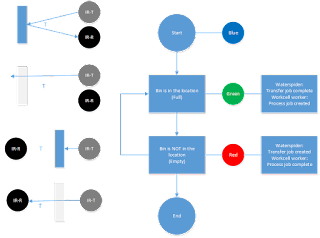 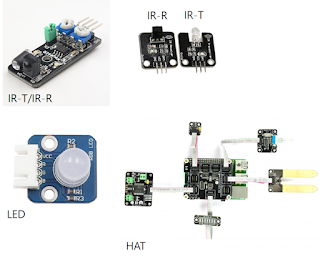 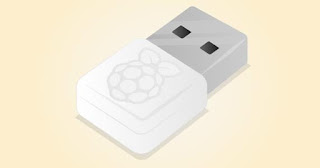 Please note that I tried to use EDIMax WiFi Dongle with Raspberry Pi running Windows 10 IoT Core and it didn't work for me (as it was not listed as a supported WiFi Dongle for Windows 10 IoT Core OS at the time of this POC)
Please find more info about connecting Raspberry Pi to WiFi network here: https://www.raspberrypi.org/products/usb-wifi-dongle/, https://ms-iot.github.io/content/en-US/win10/SetupWiFi.htm, https://msdn.microsoft.com/nl-nl/library/windows/hardware/ff553642%28v=vs.85%29.aspx
Section: Power
Please note that you can connect Raspberry Pi to power using out of the box power adapter or external power adapter instead. Raspberry Pi will need a steady 2A for proper performance. External power adapter I used had the following characteristics:
Input: DC 5V-1000mA
Output: DC 5V-1000mA
Capacity: 2600mAh
Section: Display
As I mentioned before you can connect Raspberry Pi to a display using its HDMI port
Now as we explored the device I will also provide a quick reference about how IoT is helping companies to achieve better results today
Section: References
German Manufacturer Links Workers to Parts and Stations via RFID, Bluetooth
Bosch Rexroth developed the solution to improve efficiency and accuracy at its own hydraulic valve assembly facility, and is marketing the system for use by other manufacturers as well.
The solution sends instructions to each employee at his or her workstation, based on the components for the particular item being assembled at that location.
Please fine more info about how Bosch leverages IoT to achieve more here: http://www.rfidjournal.com/articles/view?13434
Summary: In this walkthrough I illustrated how to make use of IoT device for a full automation of Make to Order Lean Manufacturing scenario in Microsoft Dynamics AX 2012. We explored the details of the device, how to use sensors to implement the scenario, and then reviewed other considerations to help to establish a successful scenario. Now we should have a good understanding of hardware part and a solid foundation for taking care of software part.
Tags: Microsoft Dynamics AX 2012 R3, Internet of Things, IoT, Raspberry Pi, Windows 10 IoT Core, Windows 10 Universal Apps, Web Services.
Note: This document is intended for information purposes only, presented as it is with no warranties from the author. This document may be updated with more content to better outline the issues and describe the solutions.
Author: Alex Anikiev, PhD, MCP

Special thanks for collaboration in building this scenario goes to my colleague, Microsoft Dynamics AX Manufacturing expert, Dan Burke 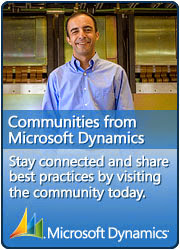